To Serve Man: An Interim Report 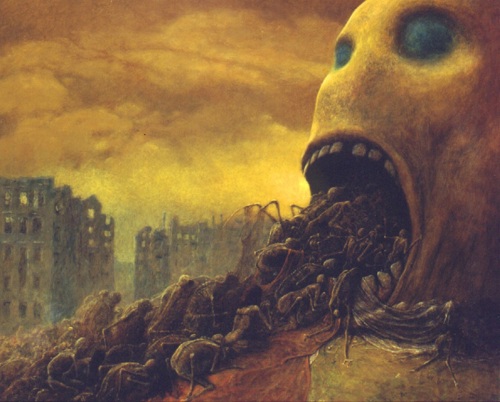 ABSTRACT:  A report on recent developments in the feeding, care, and harvesting of human beings (hereafter, ‘cattle’).

HISTORY: Approximately 5,000 SPO (Standard Planetary Orbits) ago, an agent of our corporation discovered that the third planet orbiting Yellow Star 57429 was infested with a more or less intelligent mammalian primate species. Being rather hungry after a long period of induced hibernation, the agent harvested and consumed a member of this species. The agent thereby discovered the delicacy which is the primary product of our boutique corporation, with a niche market of five amphibian or reptilian customer species, including our own.

Livestock and harvesting efforts went on on a small scale for the next 3,000 SPO, during which time we established our business. Unfortunately, after the Fifth Galactic War between the Realists and the Idealists, the survivors agreed upon the Sole Directive: ‘No member of a space-faring civilization will interfere with any non-space-faring civilization.’ This somewhat hampered livestock and harvesting efforts of our cattle for a time.

Fortunately, soon after that War, a directive issued that our corporation could continue to harvest cattle which had died naturally. Further, 1,000 SPO ago, the Intergalactic Managers decided that any indirect action, or ‘nudge’, did not constitute ‘interference’ under the Sole Directive. Our corporation was therefore given more of a free hand to achieve maximal profit. Such indirect action included gradual improvements in basic sanitation, agriculture, science, and medicine for the cattle.

In the last 200 SPO, we have been able to build the total livestock population to more than seven billion. As a result, we are now able to harvest more than 50 million of our cattle each year. More importantly, however, by several simple changes in livestock management and feeding, we have substantially increased the size, weight, and taste of our cattle.

The primary means by which we have achieved improvements in our cattle has been through application of a formula common to both mammalian and reptilian species: if a creature ingests more nutrients than it expends through exercise, that creature will gain weight. In the case of our cattle, we have worked to improve both sides of that equation: by introducing ‘labor-saving’ devices which assist in making the cattle more sedentary; and by increasing the quantity and types of foods consumed.

As to the types of food chosen, it is first important to understand the physiology of our cattle. Unlike carnivorous reptilians or amphibians such as ourselves, our cattle are omnivores, and tend naturally to a diet principally of fruits, vegetables, grains, legumes and nuts, together with some fish or meat. In fact, some breeds of our cattle persist in the regrettable habit of this ‘natural’ diet, with disappointing results as to the amount and quality of their flesh.

But in at least two of the cattle’s major population areas, we have achieved impressive results by greatly increasing the amount of meat and fish which they consume. This, combined with the quantities of alcohol which they imbibe, creates the marbling of fat in their flesh so prized by our finest connoisseurs. Who among us has not relished an evening feast, especially when our cattle have been ‘cured’ with a lifelong ingestion of nicotine, caffeine, cocaine, or other flavoring agents?

Most recently though, and in the last 50 SPO, by a closer study of our cattle’s physiology and food supply, we have obtained truly impressive results. We regret to say that we had wasted much time and protein by taking a carnivorous, species-centric point of view. But by a closer examination of our cattle’s vegetarian system, we have managed to achieve spectacular gains in cattle size, weight, and quality of taste.

For, in addition to our normal digestion system for fish and flesh, the cattle are able to digest carbohydrates, or complex chains of starches, which in turn break down into simple sugars, like lactose, fructose, or sucrose, which finally break down into glucose. which fuels all cells, whether those of cattle, or of us.

Now, if a single cattle eats a meal containing complex carbohydrates such as whole grains, beans, etc., it will take the better part of a SPR (Standard Planetary Rotation) for the creature to digest those carbohydrates into glucose. That would provide a steady supply of glucose to nourish the creature. But if the creature instead eats simple starches, glucose will flood the creature’s blood system in a fraction of that time. And if the creature decides to drink a beverage containing a double sugar like sucrose, or even better, a single sugar like fructose, that creature’s blood system will be flooded with glucose faster than a gnurl can devour a gnuzz.

And so, by indirect action on the agricultural supply systems of the cattle (we believe the cattle call these agribusiness), we have provided the cattle with an abundant supply of simple starches and sugars, which they appear now to eat and drink in preference to more complex foods which might actually nourish them, instead of feed them.

But we are pleased to note that other benefits result from this method of livestock feeding. In addition to the rapid weight gains of our cattle, the abdominal fat which results, in addition to serving as a beautiful caul fat when wrapped around a gnuzz before roasting, also appears to cause a glucose intolerance which results in chronic high blood sugar levels (we believe the cattle call this condition diabetes).  We have found that those chronic high blood sugar levels in turn cause damage to new capillary formation, which in turn causes systemic organ failure, which thus permits early harvesting. We are also hopeful that the associated systemic organ failures will assist in the production of the liver fat and cancers that are so prized among our connoisseurs.

We are thus confident that our methods of production will permit a continuous, and in fact increasing, supply of product for our niche market of customers.

B.     Methods of Harvesting Product.

One unfortunate consequence of the Sole Directive is that we have been hampered in our efforts to harvest product before it spoils or is buried, as appears to be the practice among the cattle. We are hopeful that a means of amending that directive will be achieved without, as some have feared or have hoped, a First Inter-Galactic War taking place first.

Nonetheless, we have been able to achieve some measure of success in providing our customers with the maximum of product. Our first achievement, some 1800 SPOs ago, was the invention of the Transporter. Through its means, we have managed to identify, isolate, de-rez, and reconstruct product repeatedly and successfully. While it is unfortunate that we still have not been able to make use of the Transporter to transport living creatures, the process is sufficient for our purposes.

We have also, through indirect means, persuaded the cattle both to fear death and the dead, and to bring their dead to certain places to be buried or burned. In the case of burial, we have arranged for the construction of plasti-flesh simulacra, which cost far less than our product, and have replaced them in their graves. In the case of cremation, we make sure that the product is transported before it can be burned. We are happy to say that we are convincing the cattle that it is better for their ‘loved ones’ to be burned.

PROSPECTS FOR THE FUTURE:

Concerns have been raised by both our customers and our shareholders that matters can not remain as they are. We entirely agree that with the levels of species eradication, depletion of the seas, and general destruction of the cattle’s ecosphere, it is not only likely, but inevitable, that the corporation’s main source of income will be eliminated.

We would like to assure both our customers and our shareholders that we have long ago considered this possibility, and have taken steps to address and overcome the problems which arise from it.

First, we have secured three yellow star systems which possess terra-type planets located a standard planetary distance from those stars. We have also spent the last 2000 SPOs in forming those planets to sustain life, and have transported all species of life, other than the cattle, to those worlds. We are confident that the ecospheres of those planets have stabilized, and can sustain life.

Second, we are prepared to transfer cultures of sufficient numbers of cattle to those planets to permit eventual re-population. We are informed that it was sufficient to introduce seven couples of cattle in order to populate both continents of the cattle’s secondary continental mass. We are prepared to do considerably better than that, this time.

Third, and again, through indirect action, we have managed to develop all of the cattle’s nuclear weaponry so that it is composed of fission-fusion-fission devices which kill by means of neutron irradiation. When a final conflict of the cattle occurs, we are hopeful that losses of product through incineration will be minimal, and that the irradiated (and therefore, sterile) product will be dry aged and of perfect quality by the time that it is retrieved and harvested.

We are therefore hopeful that when the cattle finally decide to eliminate themselves, or are nudged to do so, that we will be able to harvest in excess of 95% of the seven billion items of product available. We are also confident that that product can be preserved and parceled out at the current rate of 50 million per SPO for the next 140 such periods. By that time, we have every assurance that the populations of survivors (courtesy of the Intelligent Species Protection Act) will be sufficient to continue production at the same rates.

We are therefore hopeful that our customers, and more particularly, our shareholders, can have every confidence that we will continue to provide the same high level of product and service to which they are accustomed.