My late wife, Elizabeth Donovan, died on August 21, 2015. In Orthodox praxis, one traditionally mourns for a period of forty days. I thought it best to follow that practice by keeping silent on my weblog, save to announce Beth’s funeral service. That forty days ended yesterday.

Having lost my first wife, Carolyn, to cancer some twenty two years ago, I am more accustomed than I would like to be to mourning. More than anything else, the loss of a spouse, at least in my experience, is rather like an amputation, both in that a part of you is now missing, and also, that part remains in the memory, if only as a phantom ‘limb’. So it goes.

It seems, though, that these forty days have been more of a digging out from under a disaster. First, there was the funeral, which required the help of many people. I am grateful for that help, because I could not have gotten things or people together except for them. For all of those who came to the funeral, and for all of those who brought something to Beth’s party, thank you. You all made it a beautiful send off for Beth.

But parties come to an end, and ‘regular’ life still goes on. A part of that life is in picking up the pieces, and in starting to go on again.

A couple of days after Beth’s funeral, I woke up to find a small, blood-red spot in the middle of the visual field of my left eye, and some cloudiness in the vision of that eye. I decided to check my blood sugar with a blood glucose monitor, which I had not done in the last few months of Beth’s passing. I was unpleasantly surprised to find that that my morning fasting blood sugar was 190 (normal fasting blood sugars are 80-120), and even more unpleasantly surprised to find that two hours after finishing breakfast, my sugar level was 250 (normal sugars two hours after a meal for someone of my age should have been 160). I was now officially a diabetic.

But fortunately for me, I had had an ex-girlfriend who was a juvenile diabetic, and I had bought the standard medical text on Diabetes Mellitus and read it, and had followed up on the medical literature after that. As a result, I knew that Type II diabetes was due to an inability of the aging human body to assimilate insulin, most likely due to obesity in general and interabdominal fat in particular. I also knew that the normal amount of glucose in the blood was the equivalent of a teaspoon of sugar. Finally, I knew that chronic high blood sugars resulted in damage to the formation of new capillaries and blood vessels, leading to damage in the kidneys, eyes and brains of those so afflicted.

So, on the principle that if you find yourself in a hole, the best thing to do first is stop digging, I cut out all simple sugars and carbohydrates from my diet. In short, I ate no sugar, no fruit, no refined grains, and no root vegetables. Within two days, my fasting blood sugars and sugars two hours after meals had returned to normal, and are now in fact better than normal.

But the next step on finding one’s self in a hole is to climb out of said hole. In my case, I was thirty pounds over my ideal weight. So, that next step involved losing weight. Walking three to six miles a day, and a breakfast of a low carb, high protein shake; a lunch of a tin of sardines in a vinegrette of balsamic vinegar, Dijon mustard, and the olive oil from the sardines; and a varied but simple dinner, have served to help me to lose fifteen pounds in the last six weeks. We’ll see how things go. But I can report that the red dot, which started me on this project, has now faded almost to invisibility.

Turning from health to finances, I’m still in the process of digging through mail for the past six months to see how much it cost to take care of Beth. If it were not for the offer of my family to help take care of things, I would not know what to do.

One consequence, however, of being overwhelmed with taking care of Beth is that I found that a couple of fix-it tickets, which had not been taken care of, had gone to warrant. On checking things out, I found that it would cost several thousand dollars to pay the total fines. I also found that I could set up a hearing date in which to plead for the leniency of the court. But I found that if I were to pay the tickets beforehand, I would forfeit the right to get any money back at the hearing. As it is my family that would be paying for this, I thought it best to set up the hearing date for the earliest possible date, in mid-October. But this also means that for the next two weeks, I will be without a valid driver’s license, and thus, without a car. While this is inconvenient, I’ve managed to secure rides to and from church and Ride to Fly, where I continue to volunteer. As for the rest, I’ve found walking to be healthy. Again, so it goes.

Finally, I’ve been digging out of the mess that was Beth’s and my home. In the months before she went to hospice, neither she nor I were able to do much to keep the place clean. And in the six or so weeks she was in hospice, I had little will to do anything except to visit Beth. Now, I’ve managed to set the pace by setting a project of fifteen to thirty minutes for each room for each day. I’ve also been sorting out Beth’s things, and figuring out whether I should keep them, give them away, or discard them.

So, I’ve taken things one day at a time, and getting to the place where I can more or less continue to live. Eventually, I’ll get back to writing. See you then. 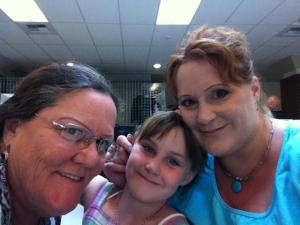 4 Comments to “Life after Beth”